I’ve been working on something a little (Ok, maybe a lot) different. Here’s a snippet:

She stood unmoving, staring out the storm door into the darkness. Every light in the house was on, but it was still so dark. She could feel it. It sunk into her skin like an unwelcome visitor that just wouldn’t leave. She was the only one awake. The darkness sat so heavily on her heart, it hurt to breathe. She was exhausted from not sleeping but so wired she couldn’t possibly close even one eye. Hopelessness. Dread. Guilt. Shame. Rejection. Loneliness. Pain. These were her friends now. And as much as she wanted to hate them and push them away, she drew them in closer in a moment of weakness. She found comfort in the old familiar darkness. She had felt it before. She had stood head to head with the darkness many a time, fighting back and trying to reclaim her life. Now she was too tired to fight. Too beaten down by this life to believe she had any fight left in her. She opened that door and let them in. All of their chaos and abusive familiarity choked her soul. She’d let the enemy in. She knew she had. But now that they were there, did it really even matter? 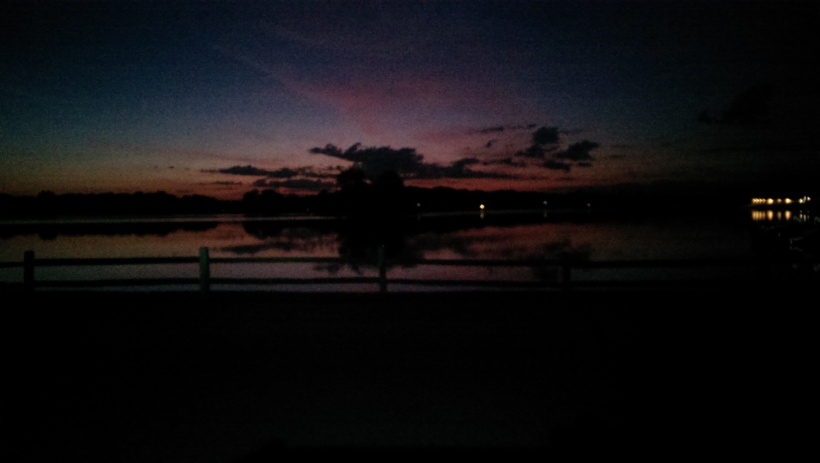 She knew it must to some degree because he had told her so. He looked at her with wary eyes. He was watching her for some sort of clue she might break. People kept asking her if she was ok. She didn’t know how to answer their simple questions so she chose not to. The circles under her eyes grew darker and darker as if the darkness itself was taking over her entire body. Maybe it was. She didn’t know. She didn’t know anything anymore. She stopped sleeping, which was achingly and devastatingly familiar. Survival mode. She knew it well. She stopped eating regularly, only doing so when he reminded her. The weight that she had put on during happier times suddenly began to slide off effortlessly. She supposed maybe that should make her just a little bit happy, but the feeling never reached her heart. It was just a thought that got blocked on the path to nowhere and was gone forever now. Like so many other thoughts that went nowhere.

Her head was a prison. But she was unsure if that meant she was locking everything in or locking everybody else out. Not that it mattered at this point. The damage had already been done. The writing was on the wall. And all of those other clichés that people use to try to accept how the past affects their future. She hated it all. All of the words. She used to love words. They made her come alive. She used to feel content and even a little powerful in the midst of her words. Now all of her words had left her. They had abandoned her. She wanted the words to dance across the paper like they once did. She wanted to feel that passion bubbling up when she really got on a roll. Instead she felt heavy with words that she didn’t dare say. Because once she said them, that would make it real. And she didn’t want any of this to be real. Except it was. At least she thought it was. The world had taken on a hazy kind of quality. Like it could actually be happening or she might have fallen asleep on the couch and found herself in this dreadful nightmare of someone else’s life. It looks and feels like her life. But she can’t touch it. She isn’t sure if it really is. Of course, this just makes her feel crazy. Crazy with thoughts. Crazy with uncertainty. Crazy with words.  Words she hates.

She stood unmoving, staring out the storm door into the darkness. It had started to rain and she found herself drawn to the outside. She moves slowly, stepping through the storm door and outside into the actual storm. The rain was cold and driving. The wind blew her hair back wildly. She closed her eyes and willed herself to be anywhere but here. To be anyone but who she actually is. She kept her eyes shut tightly and began to whisper her pleas and her demands. To the universe. To God. To anyone that will listen. With each broken plea, she feels even more desperate. The words come out in waves. Like the sea ready to overtake a tiny boat in a storm, her words threaten to capsize her. She whispers more quickly, sure that if she can just get all of the words out before she drowns, it might make a difference. Her whispers turn louder and louder until finally she is yelling. Yelling at the sky. In the rain. In the dark. Over the roar of the wind.  Her tears are washed away with the rain water. Just as she has been.

In the morning, just as he has many times, he stood over her beside and looks down at her. She is never asleep, but sometimes overwhelmed by his sincerity and concern, she pretends to be asleep. She is too afraid to disappoint him. Too afraid to tell the truth. Too afraid to hurt him with her own hurt. The door was left open last night. There are muddy footprints and leaves littering the entryway. A puddle of water where the rain came in and soaked the rug. She doesn’t know that yet, but he does. He knows everything about her. He sees everything even when she can’t. He is still standing over her and looking down when she opens her eyes. And sees him. Really sees him. If only his love for her could save her from herself. He wants to save her so badly. She can tell from the look in his eyes. He is desperate for her. He doesn’t know she is a lost cause. He doesn’t realize that she can’t let him love her because she doesn’t even love herself. She is broken. Broken beyond all repair and he is wasting his life on her.

She stands unmoving, staring out the storm door into the light. The light that never quite reaches her. She is cloaked in darkness. She is the darkness.

2 thoughts on “She is the darkness”