Here’s the thing – I never wanted to do anything like this, originally. I never planned on being the voice behind a cause. I had no drive or desire for anyone to ever think or say I was inspirational. In fact, despite the noble words that people have used for me, I have not ever felt inspirational in my life and I’m completely ok with that. I never needed my name to be known in local circles either. The only thing I wanted was for my son, Emmett, to be ok. I wanted to protect him more than anything in this entire world and I couldn’t. And so the only way I could survive that was to run. It was the only way I could be ok. That’s what started all of this.

Let’s rewind to 3 years ago: June 20, 2012. I was on the 10th floor of the children’s hospital running on a treadmill while a team of surgeons cut apart my 15 month old baby’s entire skull a few floors below me. My son Emmett was born with a birth defect of the skull called Craniosynostosis. Craniosynostosis causes the sutures in the skull to close prematurely so that the skull can not grow as it should, thus inhibiting brain growth. I vowed to run the entire time he was in surgery, no matter how long it took. I would not stop. I would not rest. I would not do anything but run until I knew he was going to be ok. I ran for exactly 7 hours and 26 minutes that day, calling it “Emmett’s Endurance Event” and raising awareness of Craniosynostosis in the process. It lit a fire under me. I had to do it again and so I ran for the 7 hours and 26 minutes on the anniversary of June 20th for the last two years. This year, I wanted to do something different.

Emmett had gone undiagnosed for the first 14 months of his life. At birth, his pediatrician had told us he was just fine when we questioned his head shape. In the coming months, we would ask our Doctor about it as well and be reassured more than once that it was completely normal and nothing to worry about. After his first birthday, Emmett began having seizures. Two different times, at two different hospitals, the emergency room discharged us telling us that there was nothing wrong with our son after the seizures. We fell through the cracks unnoticed and so I took matters into my own hands. I knew something was wrong, call it mother’s intuition or God or a gut feeling. I knew. I turned obsessively to Google for answers, searching for hours and hours, multiple days in a row, going without working, eating, and barely sleeping. After many days of this manic behavior, I diagnosed my son myself. Because of the late diagnosis and severity of Emmett’s case, things didn’t go as planned after the first surgery. Emmett has other medical issues and there’s no way to know what could have been prevented if the Craniosynostosis was corrected sooner.

There wasn’t just one surgery. There have been five surgeries so far, three related to the Craniosynostosis. Multiple times, surgeons have sliced my child’s head open ear to ear. They have peeled his entire face back all the way down to his cheekbones more than once. They have completely cut apart the bones in his skull. They have put in numerous plates and surgical screws. They have filled in holes of missing skull and patched it back up. They have cut off excess bone that was healing incorrectly and growing in the wrong direction. They have drained pockets of fluid of and blood that wasn’t supposed to be there and looked for infection. I have seen my child’s eyes swell completely shut for 8 straight days after surgery. I have soaked up pools of blood at the base of my child’s head more times than I can count. I have watched as my child became traumatized: kicking, screaming, and crying, eyes wide with fear as the nurses approach him. I have pinned him down myself to help. I’ve spent hours trying to force him to swallow all of his medications. I’ve sent him off for tests and scans over and over. I’ve seen him unconscious and seizing on the floor in front of me. I’ve seen him cry tears of blood after surgery. I’ve rocked him in my arms crying right along with him, my heart broken and my shirt stained red. I’ve begged for relief. I’ve offered up myself to God as a sacrifice if only he would heal my son. I’ve fallen apart. I’ve shattered into a thousand pieces. But I’ve stood back up and faced it. I’ve refused to sink. And still the only way I could survive that was to run. 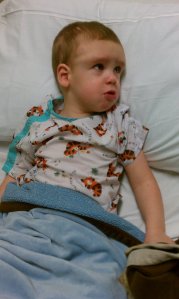 Symptoms of Craniosynostosis in an infant include an unusual shaped head, a hard, raised ridge along the affected suture, and a soft spot that closed too early. If this could be your child or a child of someone you know, I encourage you to speak to your Doctor. Craniosynostosis inhibits brain growth and can cause intracranial pressure, seizures, eye problems, developmental delays, and more if left uncorrected.